Why Mexican Chefs, Farmers And Activists Are Reviving The Ancient Grain Amaranth

Close-up of tzoallis being made during a summer nutrition workshop held by Puente a la Salud, a group based in Oaxaca, Mexico, that is helping to push an amaranth comeback. An ancient Aztec staple, tzoallis are made of amaranth and corn flour, agave honey and amaranth cereal.

On a sunny Friday morning in San Pablo Huitzo, a town in the Valles Centrales region of Oaxaca, Mexico, a half-dozen women are gathered for a workshop on making alegrías, a healthy, granola bar-like snack made with popped amaranth seeds. Their ingredient list is short: water, honey, raisins, a form of raw cane sugar known as piloncillo, and lime juice.

“The trick,” explains the event’s gracious host, Maria Lopez, “is to get the syrup to the right temperature” before adding the tiny orbs of amaranth, each barely bigger than a grain of coarse sand. 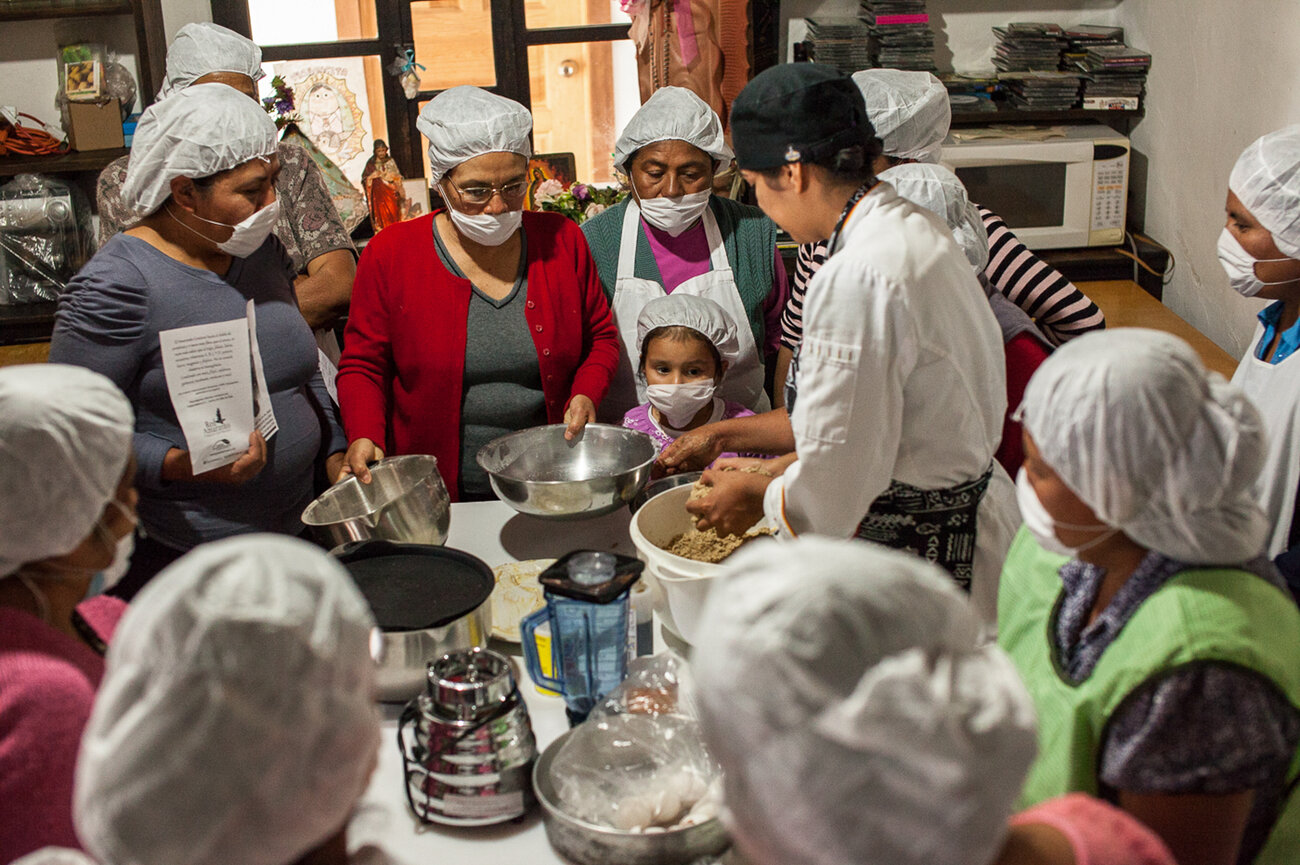 This could be any chatty gathering of neighborhood cooks in any kitchen in the world, except that in Oaxaca, amaranth is not just a fad ingredient. The ancient indigenous plant is part of a movement to revive native crops and cuisines, and a means of restoring the physical health and economy of their state, one of the poorest in Mexico.

The alegría gathering is one of six weekly microenterprise workshops that the nonprofit Puente a la Salud Comunitaria (Bridge to Community Health) holds with 25 different groups in Oaxaca. Founded in 2003 by two American volunteers in Oaxaca seeking a solution to the high rate of birth defects and childhood malnutrition in rural areas, Puente quickly hit on the idea of reintroducing amaranth into the local diet, explains Pete Noll, the organization’s executive director. 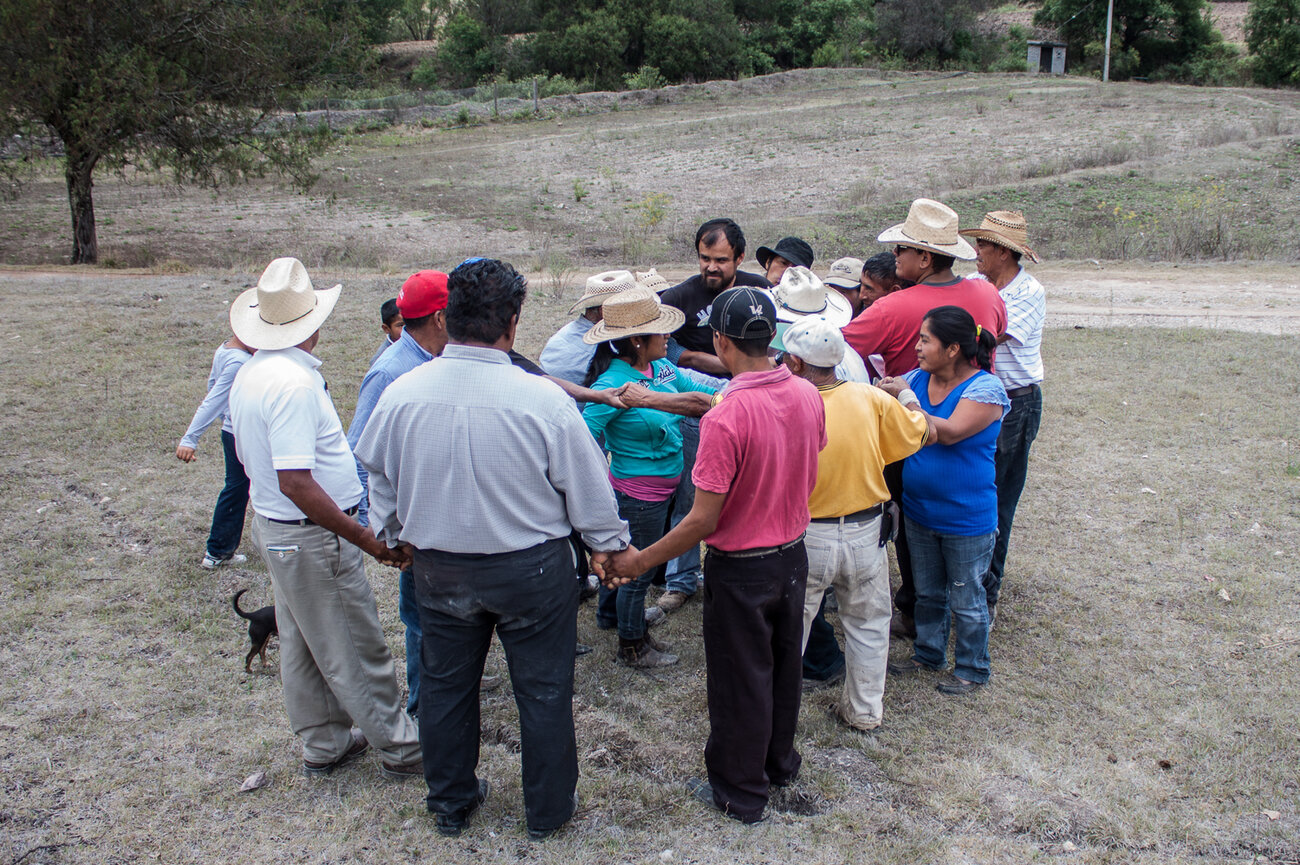 Farmers participate in a trust-building exercise at an organic fertilizer workshop in the Mixteca region of Oaxaca, Mexico. Most of Puente’s farmer partners practice what’s known as agroecological farming — which prizes maintaining biodiversity — or are “in transition” to these methods.

High in protein and other nutrients, amaranth is also drought-resistant and profitable, netting local farmers three to five times the profit of other locally grown grain crops.

Puente soon began working with small farmers to strengthen local economies through the sustainable cultivation of amaranth, known as amaranto in Spanish. As national obesity rates rose precipitously — Mexico has surpassed the U.S. in the number of overweight adults — Puente took on fighting both malnutrition and obesity. To date, the organization has worked with 6,000 families in over 80 communities to help incorporate amaranth and other healthy foods into their diet. 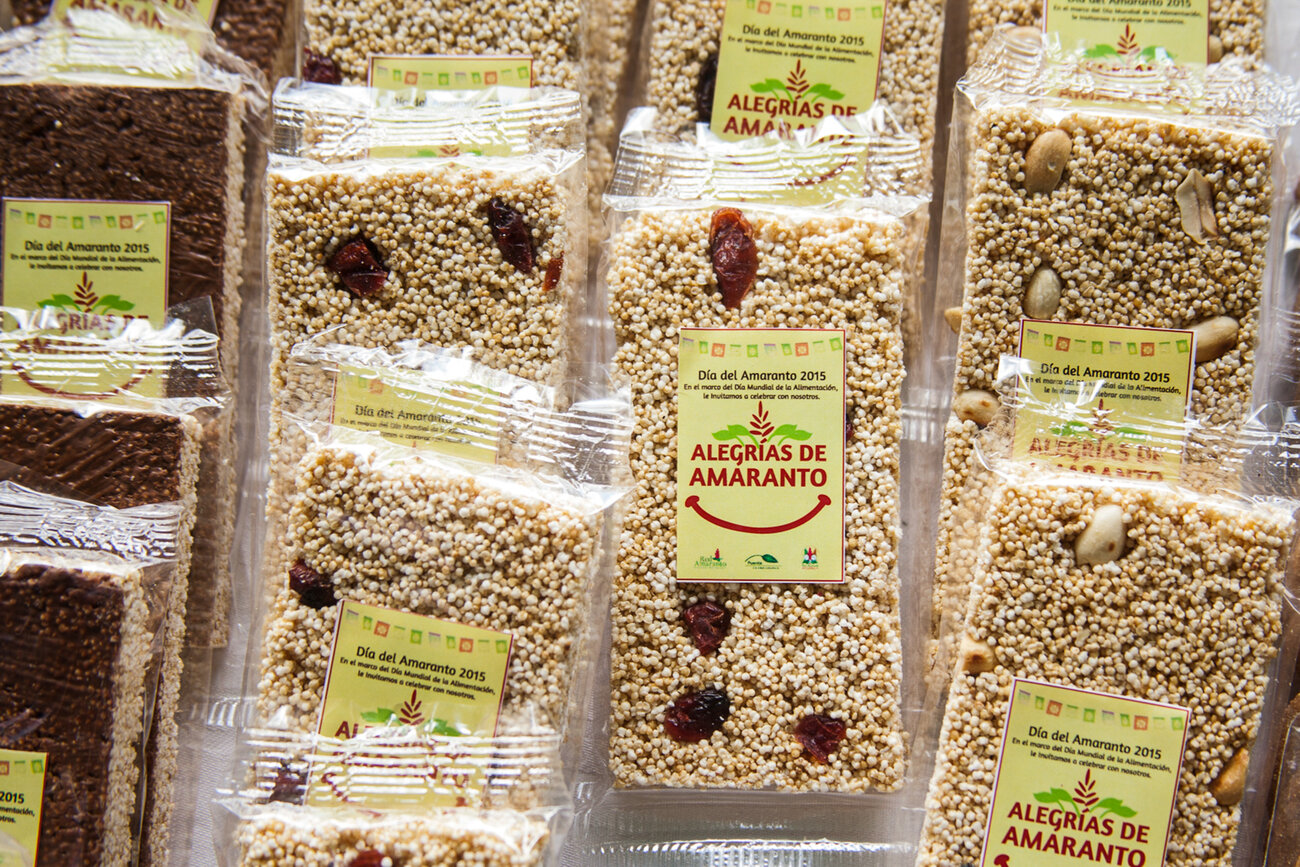 Alegrías made by microenterprise group members of the Central Valleys Amaranth Farmers Cooperative, for sale at an Amaranth Day event in Etla, Oaxaca.

In ancient Mesoamerica amaranth was known as huautli, meaning “the smallest giver of life,” and was grown in large quantities similar to that of maize. When the Spanish arrived in the 16th century, amaranth all but disappeared from the native diet. No one knows for sure why. One theory holds that the edible sculptures of Aztec deities made of amaranth, corn and honey — and perhaps laced with human blood — were a pagan threat to Spanish Catholicism.

Back at the Lopez household, after the alegría ingredients have been mixed, the women spread the mixture on a sheet of buttered paper held in a wooden frame, cut it into squares and taste the final product. The verdict: universal thumbs up. The next steps, explains Hope Bigda-Peyton, Puente’s director of development and sustainability, will be for the group to figure out costs, pricing and profit margins. Once they’ve developed their packaging and logo, they can sell their alegrías at local markets and restaurants, or at the two amaranth specialty shops that Puente operates.

Not far from where Lopez lives, in the town of Suchilquitongo, tender young amaranth leaves sprout between rows of corn on Minerva Cruz’s farm. One of close to 250 farmers that Puente works with, Cruz is in her third year of cultivating amaranth. “It’s a very noble plant and it has a lot of traditional value. That’s what caught my attention,” she explains.

Cruz has lent her farm to Puente for five years to serve as an amaranth processing center. Thanks to a federal grant, the farm recently got prototype machines that thresh and clean the plant’s seeds, which has vastly increased efficiency. It “is a really big step [forward] for Puente,” Noll says.

In the brick warehouse adjacent to the machines, Gerardo Lopez, head of Puente’s agricultural extension program, shows how each bag of amaranth seeds is carefully labeled to indicate the varietal it contains and how it was grown. Most of Puente’s farmer partners practice what’s known as agroecological farming — which prizes maintaining biodiversity — or are “in transition” to these methods. 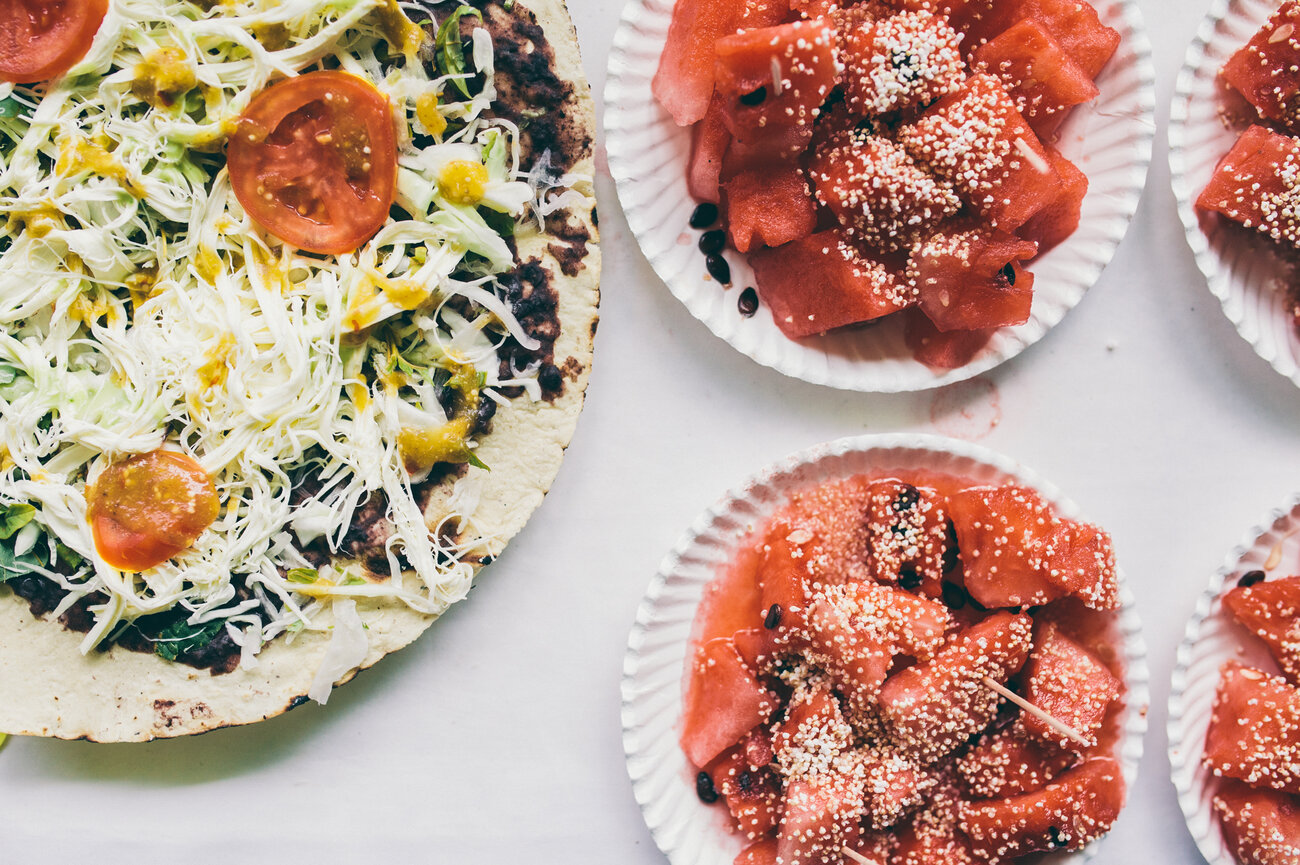 This amaranth-based, open-faced tlayuda is typical of the Mixteca region of Oaxaca. Amaranth cereal sprinkled on fruit, like watermelon, is a common way of consuming amaranth in Mexico.

Farmers like Cruz who grow amaranth have also developed a repertoire of recipes for the plant. Although the seed, flour and leaves of the bushy plant can all be consumed, cereal (the popped seeds) is the most commonly used form in Mexico. Cruz’s mother likes to add the leaves to water and blend them with lime peel to make an agua fresca.

Puente’s farmer network has so far exported to only one source outside the country, Toronto’s ChocoSol Traders. There, founder Michael Sacco and chef Chrystal Porter are perfecting a recipe for a “complete-protein tortilla,” made with amaranth, chia seeds and maize.

At Las Quinces Letras in Oaxaca City, chef/owner Celia Florián has hosted amaranth cooking demonstrations by women farmers. She also likes to highlight amaranth and other traditional ingredients prepared in healthy and delicious ways, like her sublimely refreshing agua fresca, filled with strands of the chilacayote squash and its seeds, pilonicillo, bits of lime peel and popped amaranth seeds. Another favorite dish involves blanching amaranth leaves in hot water, squeezing them dry, coating them with beaten egg, breading and frying them. The dish is served with a salsa of pumpkin seeds, or in soup.

“We encourage water over soda at the restaurant,” says Florián. “Gradually people’s mindsets are changing” to healthier behaviors. 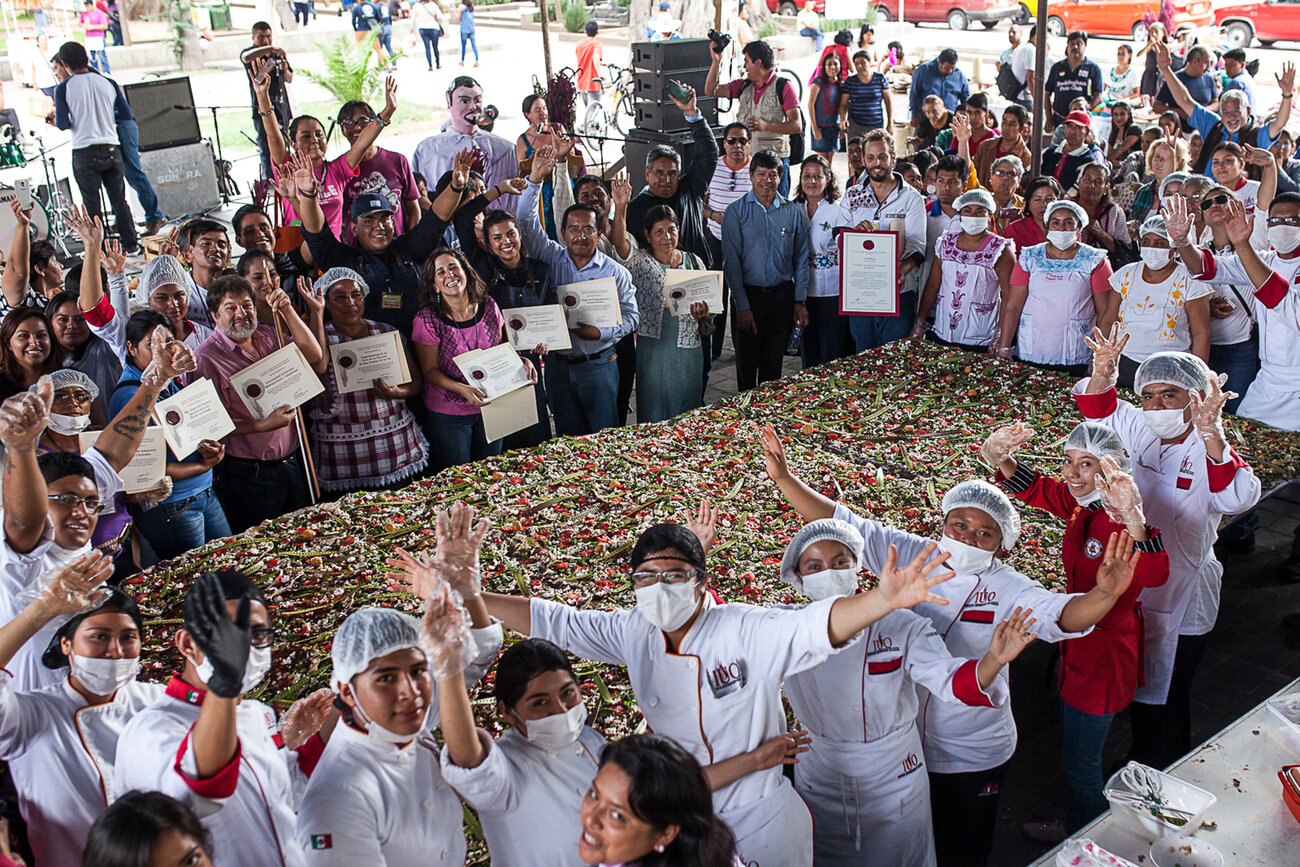 In 2016 Puente staffers and volunteers made a 12-meter-square tlayuda, incorporating amaranth flour, cereal, seeds or leaves in every layer – the biggest ever of its kind, according to the National Group for Amaranth Promotion in Mexico.

Susana Trilling runs a cooking school in Oaxaca. “I work with a lot of women from the mountains, and they use amaranth to make fritters and soups,” she says. “They boil the leaves in a clay pot with onion and garlic, and it’s always served with hard-boiled egg and Mexican rice.”

Trilling has taught some of these recipes at her school, and incorporates fresh amaranth in the summer months as part of her staff breakfast with hard-boiled eggs. “Especially during the amaranth appreciation campaign,” she adds, “people got excited” about the idea of using amaranth as an alternative to granola, in crepes, and in wafers Trilling makes with her students with amaranth flour and coconut.

If all these delicious uses are not enough to convince Oaxacans to consume more amaranth, Puente has another enticement up its sleeve.

Every October, on “Amaranth Day,” it sponsors the making of a giant tlayuda, a popular street food made by topping a corn tortilla with beans, cheese and chopped cabbage. In 2016 Puente made a 12-meter-square tlayuda, incorporating amaranth flour, cereal, seeds or leaves in every layer — from the tortilla dough to the topping of toasted grasshopper, avocado, radish and salsa.

“We thought it would last longer than it did!” recalls Bigda-Peyton. “It probably took all of 25 minutes for the crowd to finish eating it … a new take on an old favorite.”